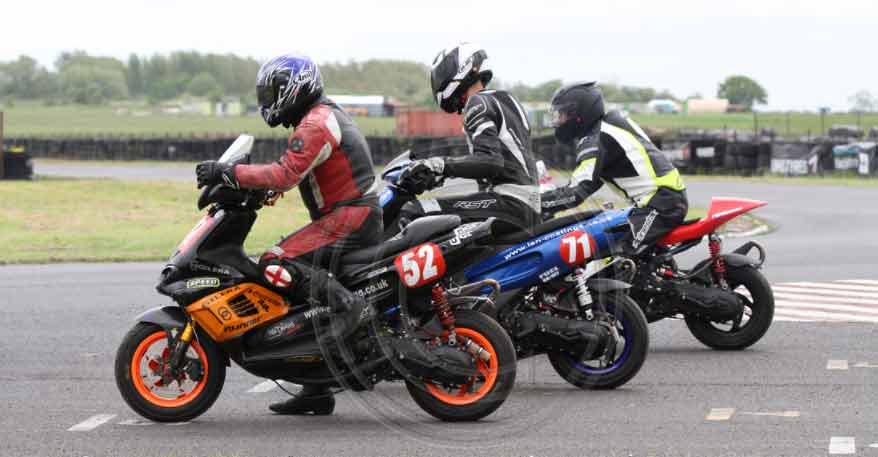 A Brief History of Scooter Racing in the U.K.

Scooter racing has evolved from very innocent Reliability Trials held by the Lambretta and Vespa Clubs back in the early 60’s. The obvious desire was to race but at the time racing was still a step or two away. Sponsors such a BP with their Zoom, wanted to impress the public with some facts that stood their products in good stead….remember Shell’s Platformate? The swell of opinion within the scooter club movement at the time was in favour of out and out racing instead of the monotonous reliability trials, which although lots of fun, had served their purpose.

Racing for scooters was deadly serious and in the early 70’s it arrived. We had many classes and as such catered for the current scooters and capacities at that time. Over the following years scooter racing evolved into a serious sport and produced many fine young sportsmen and ladies. Ann Weir, Bev Flannagan, and June Stirrup from Manchester were top of the crop for the gals, whilst Ron Moss, Doug May, Colin Hart, Trev Sharp, Pete Chapman were the leading lights in the boyz zone. However one leading rider is missing from the above names, simply because he was the best all rounder on his Lambretta, the legendary Nev Frost.

After that the sport developed and many fine riders came to the sport. Geoff Stephens, Malc Anderson, Peter Merchant, Dave Webster, Terry and Ian Frankland, and yours truly. (Apologies to the many I have omitted). In the 60’s the Federation of British Scooter Clubs (FBSC) were in control of the scooter sport scene and along with their committees of experienced riders they shaped the rules and regulations that would stand for some considerable time. In the 90’s the National Scooter Sport Association (NSSA) evolved to take the sport further forward and in time the two organisations came together to form the now present British Scooter Sport Organisation (BSSO). During this period the ACU were in control of two wheeled motorised sports.